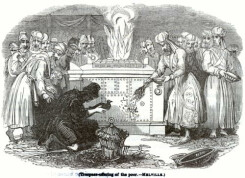 Leviticus 4 provides instructions concerning the sin offering while Leviticus 5 explains the stipulations for the trespass offering. The words sin and trespass usually can be used interchangeable throughout the scriptures because the words are synonymous with one another. However, the ceremonial offerings reveal that they are different. The Sin offering of Leviticus 4 primarily deals with our evil nature which causes us to sin ignorantly to the commands of God. The Trespass offering of Leviticus 5 atones for the fruits of that evil nature. In other words, the Trespass Offering was for specific known sins.  These were sins that the person knew what they had done because of their conscience and/or what they knew God required.

The Trespass offering, depending on translations, is noted as the Guilt Offering because the Hebrew word for trespass is ‘Asham which means reparation in compensation. As stated above, the Trespass offering was concerned with atoning and making restitutions for the actions or fruits of our evil nature. The Epistle written to James, the brother of Jesus, reveals to us the gestation of sin; “But every man is tempted, when he is drawn away of his own lust, and enticed. Then when lust hath conceived, it bringeth forth sin: and sin, when it is finished, bringeth forth death”. The Trespass offering atones for the actual conception or act of sins an individual performs

The Trespass offering not only involved the offering of an animal, but a monetary restitution of silver shekels the one wronged. If the individual had dealt dishonestly with the holy things of the Lord, the restitution was made to the priest as the representative of the Lord. If he had wronged his neighbor and the one wronged had died, then restitution was made to his kinsman. If that person had no close relative, restitution was to be made to the Lord and given to the priest (Num. 5:7,8). Through this sacrifice we are taught we are to confess our sins, receive by faith the offering laid in our place, and make amends for the wrong. This maybe a simple apology for an insult or comment that offended someone, or, returning money taken without permission. An example of this Old Testament Law laying a foundation for New Testament principle is Zacchaeus. Zacchaeus, the tax collector who wronged the people, when surrendered his life to Christ, he was ready to restore what was taken and then some to those whom he had wronged (Luke 19:8).

This illustration is a shadow of things which came in the New Testament. Jesus, who is our Trespass Offering, was offered up to the high priest for silver shekels. Through His sacrifice the wages of sin have been paid and its effects have been destroyed.

The First Letter of John reveals us Christ’s perfect sacrifice both as our Sin offering and Trespass Offering. "The blood of Jesus Christ God's Son cleanses us from all sin. If we say that we do not have sin, we deceive ourselves, and the truth is not in us. If we confess our sins, He is faithful and just to forgive us our sins and to cleanse us from all unrighteousness. If we say we have not sinned, we make Him a liar, and His Word is not in us. I write these things to you, that you may not sin. But if anyone sins, we have an Advocate with the Father, Jesus Christ the righteous, and He Himself is the propitiation for our sins" (1John 1:7-2:2). Propitiation means to atone, make a mends or reparations for. “Christ suffered once for sins, the righteous One on behalf of the unrighteous ones, that He might make a mends for us with God" (1Peter 3:18). Jesus not only paid the price for our SIN, the depraved state of humanity, but our SINS, the actions that occur because of our nature.  He has covered and cut off the full totality of our sins which result in death.  It is only through submission to the Word of God, confessing our sins, being baptized in the name of Jesus, receive the indwelling of the Holy Ghost, and live a holy and clean life before the Lord that our debt has been paid by Jesus Christ.