Before we go into the text and unveil the mystery of the red heifer we need to understand the great significance this ordinance played in Jewish history.  Without the sacrifice of the red heifer those who were deemed unclean could not be cleansed, including the priest.  As a result, no one could enter in the Tent of Meeting (Tabernacle/Temple).  It was the blood of an unblemished lamb that atoned for the sins of Israel, but it was the ashes of the red heifer that purified and cleansed Israel.

NOTE: At this point, there maybe some confusion.  However, the Old Testament was full of types and shadows of Jesus Christ.  Each type and shadow revealed to us a piece of who Christ is and His purpose.  We will find from this study the Jesus was the fulfillment of all laws of the Old Testament, being both the Lamb of God and the Red Heifer.

Furthermore, without the ashes of the Red Heifer the blood of the Passover of Lamb could not be sprinkled upon the mercy seat and atone for the sins of Israel.  It was through the Laws of Purification an individual was purified and made acceptable in the sight of God to approach His presence.

There have been nine Red Heifer sacrifices from Moses to the destruction of the Second Temple in 70AD by the Romans.  The first was processed by Moses in the book of Numbers.  The second was done by the prophet Ezra in the days of the First Temple before its destruction by the Babylonians in 586BC, and during the entire era of the Second Temple seven more sacrifices were performed.  The names of each are listed as followed as recorded by the Mishna:  Simon the Just and Yochanan (2x each), El’yhoeini ben Hakof, Chanamel HaMitzri, and Yishmael ben Pi’avi.

What is the significance of this?  The Hebrew nation is awaiting the fulfillment of prophecy concerning the rebuilding of the Third and Glorious Temple.  This construction is necessary because without the Temple there is no way to fulfill many of the religious obligations such as ritual sacrifices that the Torah requires.  Thus, Orthodox Jews believe the nation of Israel is stuck in a state of impurity (Halakah).  The birth of the Red Heifer will mark the coming of the Messiah and the sacrifice of the Red Heifer which is to be performed by the Messiah will mark the beginning of the rebuilding of the Temple.  In 1997, Jewish leaders began to breed Red Angus stock.

NOTE: This is important because the Red Heifer and the building of the Third Temple will mark the beginning of the Tribulation and the coming of the Anti-Christ who will sit in the Temple.

The Law of Purification: The Red Heifer a type of Christ

As stated above the decree of the Red Heifer is a chok do to the fact the Hebrew scribes cannot fathom how the same ashes can cause one to be unclean and clean.   The writer of Hebrews explains that the law was a shadow of heavenly things to come.  In other words, the law gave us a practical glimmer of what was to occur in the spiritual realm under Grace.  “For if the blood of bulls and of goats, and the ashes of an heifer sprinkling the unclean, sanctifieth to the purifying of the flesh, how much more shall the blood of Christ, who through the eternal Spirit offered himself without spot to God, purge your conscience from dead works to serve the living God?” (Heb 9:13-14).  The mystery of the Red Heifer and her ashes can be understood and explained through the knowledge of Jesus Christ and His death, burial, and resurrection fulfilled all the repetitive ceremonial law once and for all.

The Red Heifer, for purification, was to be without spot or blemish, a virgin, and never yoked to the works of this world.  This type of animal was very rare and the prerequisites made her very like the Passover Lamb.  We must understand that the Old Testament gives us bits and pieces of revelation concerning our Lord and Savior Jesus Christ.  Jesus is the Lamb of God; His blood is likened to the Passover Lamb that did not bear sin, but atoned for/paid the price for sin.  On the other hand, the Red Heifer gives us further evidence of the importance of Calvary and the blood of Christ by revealing to us that Christ bore our sins and His blood has the power to cleanse sin.  In simpler words, the Lamb provided the blood for atonement, while the Red Heifer displayed to us the process of purification to receive the blood.

The Red Heifer was to be slain and burned by fire (fire is the means of purification).  During the sacrifice the priest was commanded to take cedar wood, hyssop, and scarlet, and cast them into the midst of the fire.  Each item mentioned played an important role in the ceremonial cleansing for a leper in Leviticus.  Even more interesting these three items were present on the day of Calvary giving us further evidence that the sacrifice of the Red Heifer was a type of Christ.

NOTE: Cedar is extremely resistant to disease and rot.  It is believed that the cross which Christ was crucified on was made of cedar.  Hyssop was an element in purging sin and it was offered as a drink to Christ on the cross.  Scarlet, the color of blood was the “robe” put on Jesus by the soldiers at Calvary.

Since the rejection of Jesus Christ 2,000 years ago the nation of Israel is still awaiting the Messiah to perform the Red Heifer sacrifice and mark the rebuilding of the Third Temple.  The fact of the matter is Jesus Christ was the Tenth Red Heifer that gave Himself as a sacrifice.  And on the third day He rose again establishing the Third Temple that was not built by the hands of man through brick and stone, but a spiritual temple as the prophesied.

The Law of Purification: Water of Separation a Type of Baptism

The Bible tells us, “For he hath made him to be sin for us, who knew no sin; that we might be made the righteousness of God in him” (2Cor 5:21).  Indeed, Jesus Christ literally became sin on our behalf and endured the full judgment of sin for our sakes.  This explains to us the reason why the priest when coming into contact with the ashes of the Red Heifer was rendered unclean; it was not until the Resurrection of Jesus that the blood provided the way for purification. 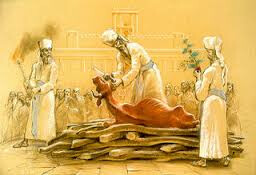 This is why the priest after coming into contact with the ashes of the Red Heifer immersed himself in water, washing both his flesh and clothes, in the Chamber of Immersion.  The Chamber of Immersion was a pool where running water from the Pool of Shiloah met outside the Temple and was mixed with the ashes of the Red Heifer for purification.  The Bible describes these waters as the “Water of Separation” (Num 19:9-10).  Those who have been rendered unclean by the law were commanded to wash in the water of separation for the purification of sin.  On the seventh day those who washed on the third day (shadow of the Resurrection) were purified and cleansed.  However, those who failed to do so were unclean and cast out of the congregation.

Water throughout the Bible has been used as a means of separation from clean and unclean.  The Exodus story when Israel was being pursued by the Egyptians gives us an example of how water was used to separate holy and unholy.  It is through water baptism that we are made clean from sin by the application of the blood and separated from our sinful lifestyle (Acts 2:38; Rom 6; 1Peter 3:21).

Baptism of the New Testament is the “water of separation” of the Old Testament.  Without baptism those who are unclean can not be cleansed from their sins because purification comes through the water being mingled with the ashes, i.e. the blood.  “Repent, and be baptized every one of you in the name of Jesus Christ for the remission of sins, and ye shall receive the gift of the Holy Ghost (Acts 2:38-40).  The ordinance of the Red Heifer gives us an Old Testament complete account of God’s plan of Salvation which included the death, burial, and resurrection of Jesus Christ and the protocol that must be taken by His people to receive and apply the blood that was provided through the process of purification through the waters of separation (baptism).