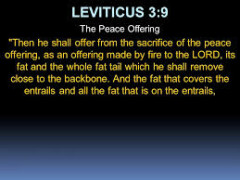 The peace offering is also called a fellowship offering depending on the translation of the Bible some individual uses.  In the Hebrew, the word for peace is sheh’lem which means reconciliation, peace, and friendship.  Peace offerings were required at the Feast of Passover and Pentecost, the fulfillment of vows, particularly the Nazirite vow, and at the dedication of priests. Otherwise, this type of sacrifice could be performed at any time by the offerer for it was a sacrifice of thanksgiving.

The peace offering was performed by the offerer who was in right relationship with God based on the prior offerings.  This type of sacrifice was the means of celebrating God's goodness and the offerer’s appreciation for God’s bounty.  Now fellowship with God and the believer was renewed; it is the only offering that the worshipper ate a portion of the sacrifice which was dedicated to the priest and God.

Note: Communion with God is obtained through our obedience to His Word and submission to His plan of Salvation.  Before true fellowship between the individual and God can be established the other sacrifices must have been performed and accepted.  It is through Christ, our peace offering, who was the perfect sacrifice we can expect to obtain mercy and peace within our lives because he has fulfilled all the obligations of the law.  “Therefore being justified by faith, we have peace with God through our Lord Jesus Christ:” (Rom 5:1).

Our communion with God is a progressive experience that does not simply end with Calvary, but it is the purpose of God for us to grow behind repentance and baptism.  He desires an intimate relationship with us that will bear spiritual fruit.  This type of relationship is developed through worship.  The peace offering of the Old Testament by the offerer to God was type of praise; literally the offering itself was in adoration of God.  Under the New Covenant it is no longer necessary for us to offer up animals in praise to God, however, “By him [Jesus] therefore let us offer the sacrifice of praise to God continually, that is, the fruit of our lips giving thanks to his name.” (Heb 13:15).   What was performed practically under the Law is not performed spiritually under Grace.

Other offerings were accompanied with the peace offering; they included the wave and heave offerings (Lev 7).  Each of these offerings reveals to spiritual principals to grow into a deeper communion with the Lord.  For the New Testament believer, we learn that our communion with God is celebrated through our worship, which includes our sacrifice of praise and monetary offering.

The Wave Offering:  Leviticus 7:30 describes to us the Wave offering which part of the Peace Offering.  It is known as a wave offering (T’nufah) because the breast of the sacrifice would be taken up by the priest and literally waved horizontal before the Lord depicting His authority over the earth.  Its purpose was to express the peace or reconciliation between the worshipper and God.

There are other types of wave offerings recorded in the Bible which were included with the jealously offering, the leper’s trespass offering, and perhaps the best known is performed at the Feast of Pentecost: The Wave-sheaf offering.  The Wave-sheaf offering was a presentation to God of the first fruits of the harvest.  This type of offering was symbolic of Jesus’ resurrection, “But now Christ is risen from the dead, and has become the first fruits of those who have fallen asleep” (1Cor 15:20).  However, for this study on the four blood sacrifices of the Old Testament we will expound upon the breast of the wave offering.

The breast/bosom as referred to in the Bible was a place of honor, security, support, fellowship, comfort, and love.  In Luke 16 Jesus tells the story of the Rich Man & Lazarus.   Lazarus was a poor beggar who died and the angels carried him away to “Abraham’s Bosom”.  The poor man who found little or no comfort on earth was comforted after death by being given the place of closest fellowship with the father of the whole Hebrew nation.

Secondly, we find the beloved Apostle John, sitting at the right hand of Jesus at the “Last Supper”.  The Bible describes John’s position in the Gospel of John as “leaning on Jesus’ bosom”.   The closest place of fellowship was found on the bosom of Christ.  The Songs of Solomon is perhaps one of the most sensual books written in the Bible.  Its depictions are not the perverted lust of man, but the love and intimacy Christ has for His Church.  Numerous times the word breasts are recorded revealing to us the strong love and intimacy of this relationship.

The breast being waved before the Lord was symbolic of the reconciliation of fellowship between the God of Creation and mankind which was created.  After the ceremonial waving had been completed the rest of the meat was given to the worshipper to eat and commune with the Lord. 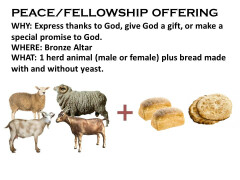 This type of Old Testament offering reveals to us the Biblical principals of New Testament giving.   “Let the elders that rule well be counted worthy of double honour, especially they who labour in the word and doctrine. For the scripture saith, Thou shalt not muzzle the ox that treadeth out the corn. And, The labourer is worthy of his reward (1Tim 5:17-18).  It is a Biblical principal that those who labor in the church i.e. pastors, elders, and ministers are to live off the tithes of the church and use the offering to make sure the house of God is in order.

This principal shows us, members of the congregation, that one aspect of our fellowship with God is our faithful monetary giving to the church.  God calls us to cheerfully give because there are some blessing we will never receive and/or there is a level of fellowship with God a believer will never reach if he/she does not give in support of the local church (Mal 3:8).  Our tithing must be out of faith and not from a grudging heart.  In monetary comparison, the poor widow gave much less then those who prospered, but Jesus honored this woman because she gave all that she had out of faith.  Tithing is no longer a matter of the law, but it is an issue of the heart.  “Give, and it shall be given unto you; good measure, pressed down, and shaken together, and running over, shall men give into your bosom. For with the same measure that ye mete withal it shall be measured to you again” (Luke 6:38).

The Meat Offering:  Leviticus 2 describes to us the meat offering which consisted of unleavened wafers consisting of frankincense and salt.  The wafers/cakes were then anointed with oil and given to the priest to offer before the Lord.  A portion of the offering was then given to the priest to consume which represent perfect and holy communion with God.  The word meat in the KJV does not pertain to actual meat from live stock, but it is derived from the Hebrew word minchah, which mean offering from the harvest.

The meat offering like the other offerings we have discussed was representation of our Lord and Savior Jesus Christ.  The unleavened wafer was baked from fine flour/wheat.  We know from typology that leaven was symbolic of sin.  On the other hand, unleavened depicts purity, holiness, and righteousness.  The wafer was also known as the “bread of God” (Lev 21:6).  From New Testament text, we find that Jesus described himself as the bread of God in John chapter 6 verse 33, “For the bread of God is he who cometh down from heaven, and giveth life unto the world.”

The wafer was also made with salt and frankincense.  Salt is a pure crystalline element used as a preservative for preventing bacteria build up which will cause infection or decay.  It is also often associated with covenant making as an emblem of perpetuity.  Number chapter 18 verse 19, “All the heave offerings of the holy things, which the children of Israel offer unto the LORD, have I given thee, and thy sons and thy daughters with thee, by a statute for ever: it is a covenant of salt for ever before the LORD unto thee and to thy seed with thee.”  Again, in 2Chronicles 13:5 we see salt is used to describe an everlasting covenant, “Ought ye not to know that the LORD God of Israel gave the kingdom over Israel to David for ever, even to him and to his sons by a covenant of salt?”  Salt within the wafer denotes to us God’s everlasting covenant with His people found in His Holy Word through Jesus Christ.

Frankincense is incense used ceremonially as a sign of acceptableness.  The meat offering was to be a, “an offering and a sacrifice to God, of a sweet smelling savour”.  We find that frankincense was used four times throughout the scriptures as a sign of acceptance: 1. Meat Offering (Lev; Num; Neh). 2. The Church (Song 3-4). 3. Jesus Christ, both at His birth and death (Matt 2; Luke 23). 4. The rejection of Babylon (Rev 18).  Jesus Christ was an acceptable sacrifice to God and through Him, the Church, is perfected without spot or blemish and received by God.

Lastly, the wafer was anointed with oil.  Oil is symbolic of the anointing which comes by the Holy Ghost.  A laymen’s definition for anointing is God’s acceptance of an individual for a position.  Oil was used to anoint the kings of Israel which included Saul, David, and Solomon.

John the Baptist observed the anointing of Jesus at His baptism when he saw the Holy Ghost descending like a dove and rest upon the head of our Lord.  It was now the ministry of Jesus Christ began on earth when He, being the Anointed One, was manifested publicly.

We find this type of action by God through out the Old Testament.  For example, Joshua was anointed publicly before the priest and people as Moses successor.  David, was anointed by Samuel in the secrecy of the fields, but again before the people when it was time for him to take the crown.  These examples must be taken to heart for those of us who are called by God into the ministry.  Before the called minister can stand behind the pulpit in pastoral authority he must first mature under the wings of his predecessor, openly be anointed before the people as a sign of authority, and most importantly be anointed by God.  Being anointed by God for the position occurs in the shadows of the present man of God.  This anointing will already be displayed to the people even before it is publicly decreed through the man’s character, disciplines, and spiritual gifting.

In summation, Christ symbolically plays all three parts: He is our peace offering.  He sacrificed His life as our High Priest serving as our Mediator reconciling us back to God in the giving of Himself.  This offering shows us that sincere and faithful sacrifice is the heart and foundation of intimate fellowship with the Lord and acceptance.