The Dispensation of Innocence

The age of “Innocence” commenced from the creation of Adam to his expulsion from the Garden of Eden.  Adam, the first man that was created by God in His own image was born into full maturity with a self will.  Man’s ability to make chooses by his own volition gave man a uniqueness that God’s other creatures did not possess.  It was this specific uniqueness in man that God was able to create a covenant relationship with mankind throughout time.  The Covenant established by God with Adam is known as the Edenic Covenant named after the Garden of Eden which the first of humanity lived. 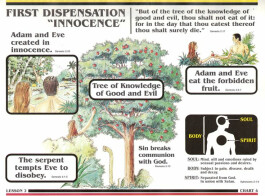 Adam was a perfect, immortal creation that was given dominion over all the earth.  This perfect man was placed in an atmosphere with ideal conditions.  Not only were Adam’s spiritual needs met by his unhindered intimacy with the Lord but every physical necessity was provided for within this Garden.  God had given Adam every tree in the Garden to eat of with the exception of the “Tree of the Knowledge of Good and Evil”.  Adam was commanded not to eat the fruit of this tree and was warned of the consequences of such an act (Gen 2:15-17).

The Forbidden Tree was an element that grew in the garden too tests the reciprocated love of mankind for God.  The true test of any intimate and loving relationship is sacrifice.  Those who are married know this better then anyone.  There are times that one spouse does not want to go to the mall, watch that television show, or drive countless hours to a special event, but out of love they sacrifice their own desire to please their partner.  Sacrifice of one’s own life is the epitome of love.  We see this example in the life of Jesus Christ who gave His life to all humanity even before the climatic act of love at Calvary when He gave up His life through His earthly ministry.  “Greater love hath no man than this, that a man lay down his life for his friends” (John 15:13).  The majority of the time our love for God is tested in circumstance which we will have to make a choice to obey.  The Tree of the Knowledge of Good and Evil was the mechanism that presented that choice to Adam and Eve.  Obedience to the Word of God is a sacrifice which manifests our love for Jesus Christ.  Christ said in John chapter 14 verse 15, “If ye love me, keep my commandments”.

In Genesis chapter 3 we find Eve in the vicinity of the Forbidden Fruit conversing with the serpent.  This was a daily routine for Eve for the Bible reveals to us that the serpent initiated conversion with Eve and she was not frightened at his presence or appearance.  We can conclude the dialogue recorded in the Bible was not the only time Eve had conversed with the serpent because of her reaction and responses to the speaking serpent.  Eventually, Eve yielded to her appetite and took the fruit and gave it to her husband.  As a result, the Edenic Covenant was broken, there conscience was illuminated, and they were cast out from the Garden.

Temptation is defined as the act of allurement or enticement of an individual to react in a particular manner.  Temptation in its own right is not sin but it is the reaction toward the act of the temptation that conceives sin.  The book of James reveals to us that, “every man is tempted, when he is drawn away of his own lust, and enticed.   Then when lust hath conceived, it bringeth forth sin, and sin, when it is finished, bringeth forth death”.  The anatomy of temptation is fairly simple.  An individual is drawn away from the presence of God and the ways of God by their own carnal desire.  As a person then ponders upon the desire it is further instigated by an outside influence to produce a decision in the mind to gratify that desire.  This lets us know that sin is not birthed in the act of conception but conceived in the mind.  The act itself is sin which eventually lead to both a physical and spiritual death.

“There hath no temptation taken you but such as is common to man:” To be taken is to be violently seized, enveloped, gotten hold of.  The second stage of temptation is where the struggle between the spirit man and the flesh man wage their warfare.  Most of the time the battlefield is set up to handicap the spirit man by visual or oral stimuli that continually feeds the want of the flesh.  The mind then begins to activate to make a decision that produces an action.  The fact of the matter is the mature Christian knows when he/she is traveling down the slippery road of temptation.  He knows when the flesh begins to act up and he knows when the enemy begins to instigate.

Our carnal desire so subtly takes us away from our times of communion with God and other believers.  The focus is so much so on the desire that we draw ourselves away from any healthy spiritual influence that we might have.  We stop speaking to God whether it is in times of prayer or study.  You then begin to outsmart yourself by ignoring phone calls or even shutting off the phone just incase someone from the church calls.  Eve’s first mistake was leaving the presence of her husband which they was compounded by her not telling her husband.  Or was it?  It is a truth that our adversary loves to isolate Christians.  When a Christian is an island unto them selves they are vulnerable to manipulation which results in being drawn away into sin and unhealthy spiritual habits.  The fact of the matter was Eve was not alone when she spoke to the serpent and took of the fruit.

We have become so accustomed in church to blame Eve and over spiritualize the Scriptures that we fail to realize that Adam was with Eve.  The Bible says in Genesis chapter 3 verse 6, “And when the woman saw that the tree was good for food, and that it was pleasant to the eyes, and a tree to be desired to make one wise, she took of the fruit thereof, and did eat, and gave also unto her husband with her; and he did eat”.  Adam was ease dropping on a conversation that he wanted to be a part of but too afraid to get involved in.  Eve ended up by the Tree of Knowledge of Good and Evil because she was following her husband.  We must acknowledge that Adam was to keep the garden.  This gave Adam privilege to know the whereabouts of the garden.  He knew exactly where the Forbidden Tree was.  The question is, “Why would he take his wife to the danger and not stop her when she was about to fall?”   Adam was the type of person who had a desire, but was fearful of the consequences to act upon that desire.   Thus, he set his wife up to test the waters for him.  When Adam saw that his wife did not die when she bit of the fruit he himself took of it.

Many people ask, “If God knew Adam and Eve were going to sin why would He place the fruit in the midst of the Garden?”   The Tree of Knowledge of Good and Evil was a necessity in the Garden to test the will of man.  God did not create us to be robots, but beings that can display sincere attributes of love.  No matter how hard a man tries he cannot force a woman to love him and marry him.  Love is not something that is coerced or forced on people but it is a submissive force that brings satisfaction to the soul.  Two people enter into marriage of their own voluntarily will.  It is by their own chose that the love which they have for each other is manifest.  The Tree of Knowledge of Good and Evil gave man the opportunity to display His love for God through the sacrifice of obedience.

Man fell short of righteousness in Eden and the covenant between Adam and God was broken which resulted in judgment.  As stated in the introduction of the Dispensations every period ended in judgment.  This act of disobedience separated perfect communion with God, the expulsion out of the Garden, and a curse upon man and woman (Gen 3:16-19).  With the closing of the Dispensation of Innocence we enter into the period of Consciousness. Here God did not leave man in hopeless in a place of judgment, but disclosed to Eve a promise of a Messiah that would bruise the head of the serpent (Gen 3:15).