The Dispensation of Human Government

The Dispensation of Human Government begins after the Flood and extends to the establishment of God’s covenant with Abraham.  Nevertheless, the idea and principal of human government continued to exist throughout the Bible and to this present age where mankind seeks a tangible monarchy rather then a spiritual theocracy.  In the previous dispensations man failed to govern themselves by their own will and conscience which resulted in worldwide judgment.  After the “Flood” God declares the evilness of man’s heart, but covenanted with Noah that He would not destroy all His creation by flood waters again.  As a token of this covenant God gave a rainbow to be a reminder to all mankind in every generation of this covenant.

The establishment of the Noachic Covenant also gave man the ability to govern themselves. This covenant made man God’s judicial agent to carryout God’s judgment upon those who would rebel against His law.  In Genesis chapter 9: 5-7 God institutes capital punishment for murderers to further restrain mankind’s wickedness.  Because of the institution of capital punishment man became required to identify himself with a corporate body that would investigate and carry out God’s sentence.

Before the institution of capital punishment, we find that the first murderer, Cain, received grace from God’s death penalty and could reproduce a lineage of lawlessness.  Men such as Lamech, who was the first polygamist, and Tubal-cain, a craftsman of idols, were born from the seed of Cain.  The Bible reveals to us in Genesis chapter 5:24 that the generations after Cain actually grew worse, “If Cain shall be avenged sevenfold, truly Lamech seventy and seven-fold”.

Human government’s purpose was to work in unison with man’s conscience, ordinances of God, and the unction of the Holy Spirit to keep mankind from a furtherance of wickedness.  In the New Testament Paul exhorts believers in Rome to submit to governing authority because they are ordained by God to carry out His judgment on those who work evil.  This lets us know those who work within the criminal justice system as judges, police officers, and lawmakers are positioned by God to maintain order in our communities.  “For he is a minister of God to thee for good.  But if thou do that which is evil, be afraid; for he beareth not the sword in vain: for his is the minister of God, a revenger to execute wrath upon him that doeth evil” (Romans 13:5).

In this dispensation, we find that humanity was unified under a common language (Gen 11:1-8).  This lack of communication interference allowed men to gather together under the headship of Nimrod, king of Babel, to be governed.   Nimrod, whose name means rebel, is a descendant of Ham the second son of Noah.  He was highly intelligent, but he did not know God and he ignored the Word of God.  Nimrod planned to create a tower which would reach up to the heavens to prevent mankind from being scattered over the face of the earth and represented man’s own ingenuity and prowess as gods.  This tower became known as the Tower of Babel.

In Genesis chapter 11 that the Lord came down to the tower and saw what man was building.  In response to man’s rebellion God confused mankind’s language which broke communication between the builders.  Thus, the builders eventually stopped the construction of the tower and humanity scattered across the face of the earth as God intended in the first place.  This is the reason why we have hundreds of nations and thousands of languages in the world today all stemming from the three sons of Noah:  Ham, Shem, and Japheth.

The sons and daughter of Ham, Shem, and Japheth scattered throughout the world according to their own dialects settling in different regions.  As time progressed each group of people assimilated into their new environments and adapted physically to suit their new regions of settlement.  This allowed for racial distinctions and physical differences such as skin pigmentation, eye structure, body build, and thickness of hair. 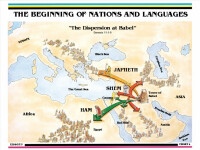 Ham, whose name means hot, settle in the tropical climate of Africa.  While Japheth, whose name means enlargement, settled in the European region.  The people of Shem dwelled in the Middle-East and Asia.  From Shem’s lineage, the three major world religions were birth; Judaism, Christianity, and Islam.  All which hold great historical ties to the patriarch Abraham.

This first corruption of human government became a continued theme through out Biblical and present history.  We are given account after account of men who deceived the people by manipulating the intent and principals of the government to feed their own ambitions.  One such example is recorded in Exodus 32.  Moses left the people to be in the presence of God on Mt. Sinai to receive the law.  After some time, sedition arose within the camp that turned the people away from God to create a molten image.  We find the people of Israel later in their history choosing a man to reign over them as king rather than God.  Both accounts reveal the rejection of God and pride of man as in the days of Babel to rule themselves separate from God.

In summation, man’s relationship with God has been hindered again by the evil intents of his own heart.  It seems that both neither the will of man, his own conscience, nor a corporate governing body has the capability to retrain the wickedness of mankind.   With the world on the verge of total corruption again God chooses Himself a people of His own.  This race of people would be a separate and holy people that would display the power and authority of God to the world.  This marks the Dispensation of Promise, when God calls Abraham out of the land of the Chaldeans, and enters a covenant relationship with him to begin the lineage of God holy people.