The Dispensation of Conscience extends from the “Fall’ of mankind to the “Flood” during the days of Noah.  This dispensation lasted approximately 1656 years which man was guided only by his conscience.  Thus, this period became known as “Conscience”.  In every dispensation God established a covenant with His people.  The first family broke the Edenic Covenant, where all the needs of man were provided by God as long as man obeyed the command of God, which resulted in the expulsion.  Likewise, in the dispensation of Conscience the Adamic Covenant was enacted which required man to replenish the earth, labor for his nourishment, and perform blood sacrifices for sin. 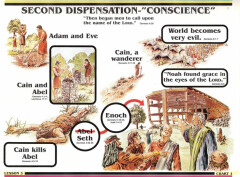 The consciousness of man, which is the knowledge of both good and evil, was birth when Adam ate of the forbidden fruit in Genesis chapter 3.  It was this enlightenment that man was able to formulate decisions based on what was acceptable or not.    During this period God did not give any specific commands to regulate man’s actions.  There were no “thou shalt nots”.  Man was left to his own heart to guide him.  Needless to say, even though man had the knowledge and ability to do good their hearts became hardened and the generations following the expulsion from Eden became extremely wicked. “And God saw that the wickedness of man was great in the earth, and that every imagination of the thoughts of his heart was only evil continually” (Gen 6:5).  As a result of the sinfulness of man and their frustration of grace, God no longer strove with mankind but repented that He had made man on the earth and said, “I will destroy man from the earth”  (Gen 6:7).

The means which God chose to destroy the wickedness of man over the face of the earth was water.  Water throughout the Scriptures signifies the purifying and cleansing power of God.  Water was used to cleanse the lepers, heal the infirm, and wash the sheep before they were placed on the altar.  We understand that when Israel escaped from Egypt they had to pass through the waters of the Red Sea.  This historical passage is symbolic of our escape from bondage and death to freedom and life that only comes through the waters of baptism.  It was the power of the waters of the Red Sea that cut off the authority of Egypt over Israel.  Baptism, which is the operation of God, is a procedure which God has implemented in our Salvation to cut off the authority of Satan over our lives.  Peter writes in 1Peter 3:20-21, “when once the longsuffering of God waited in the days of Noah, while the ark was a preparing, wherein few, that is, eight souls were saved by water.  The like figure whereunto even baptism doth also now save us (not the putting away of the filth of the flesh, but the answer of a good conscience toward God,) by the resurrection of Jesus Christ:”

As we have experienced our conscience may produce fear, guilt, and remorse, but it does not have the power to keep us from doing wrong.  Just as Adam was tested in the garden of Innocence so was man tested in the fields of Conscience.   In Genesis 4:3-7 God accepted Abel’s blood sacrifice but rejected Cain’s bloodless sacrifice. This implies that the revelation which God gave to man for the second dispensation was that man was to approach the altar of God only by means of a blood sacrifice (Heb. 11:4).

Sinful man, no matter how sincere, could not come to God in his own way by his own work.  Abel’s sacrifice was by faith contrary to Cain’s sacrifice which was by works.  We know this because God sentenced mankind to labor in the fields and cultivate the ground for his own provision.  This implies that Cain’s sacrifice was by the work of his own hands.  The Bible says, “For by grace are ye saved through faith; and that not of yourselves: it is the gift of God: Not of works, lest any man should boast.” As a result of Cain’s own jealously and discontent for the things of God he premeditated to commit murder and slew his brother Abel in the fields.

The Bible warns us of the “Way of Cain” in Jude chapter 1.  It is the way which man chooses to rely on their own skill, mind, and abilities rather then the provision of God for salvation.   Cain continued to rely on his own ability which gave birth to a godless lineage which became characterized by violence and polygamy.  Lamech, the seed of Cain, was the first man to institute polygamy by taking two wives.  His grandson Jubal was the father of “all such as handle the harp and organ”.  His other grandson, Tubal-cain, was “an instructor of every artificer in brass and iron”.  These two men were the fathers of idol worship and idol making which furthered the depravity of mankind.  There grandfather, Lamech, was so corrupt that he boasted in murder so much so that he tempted the Lord to punish him “seventy and sevenfold” times more than Cain (Gen 4:19-24).

Some will question how God could hold people accountable for their actions when there was no written law.  The Age of Conscience does not excuse man for his actions as we see in the judgment which God pronounced on Cain because of the murder which he committed.  In fact, Conscience shows us that a written law is not necessary for God to judge man righteously because there is an unwritten law which is written on the hearts of man (Rom 2:14-15).   Every man is accountable no matter when and where he exists.  Man possesses the knowledge to know what is morally right and wrong.  This was birth into us since the time Adam took of the tree of the Knowledge of good and evil.  For example, whether a man hears the Word of God or not all cultures teach murder and stealing is wrong.  Even before Moses received the written law from God the Code of Hammurabi existed in Babylon.  The code consisted of 282 statutes that dictated moral and civil law during the reign of King Hammurabi.   We see from this secular example that belief in Jehovah is not a prerequisite to the knowledge of what is morally correct.  Such laws are embedded into every man's conscience, which creates a moral compass.  Although we possess this moral compass the power to restrain and/or eliminate ourselves from breaking the law in all facets is impossible.

While in this flesh our conscience is vulnerable to manipulation, degeneration, and hardness do to the environment which we live in.  Movies, television, news papers, video games, and every day talk desensitizes our moral compass into accepting violence and other debase activities as everyday occurrences.  There was once a time that cursing at the work place was non existent and if it were to happen it would be frowned upon.  However, cursing at the work place has become part of the everyday work language.  Such desensitization results in behaviors and habits that were once inappropriate the norm.